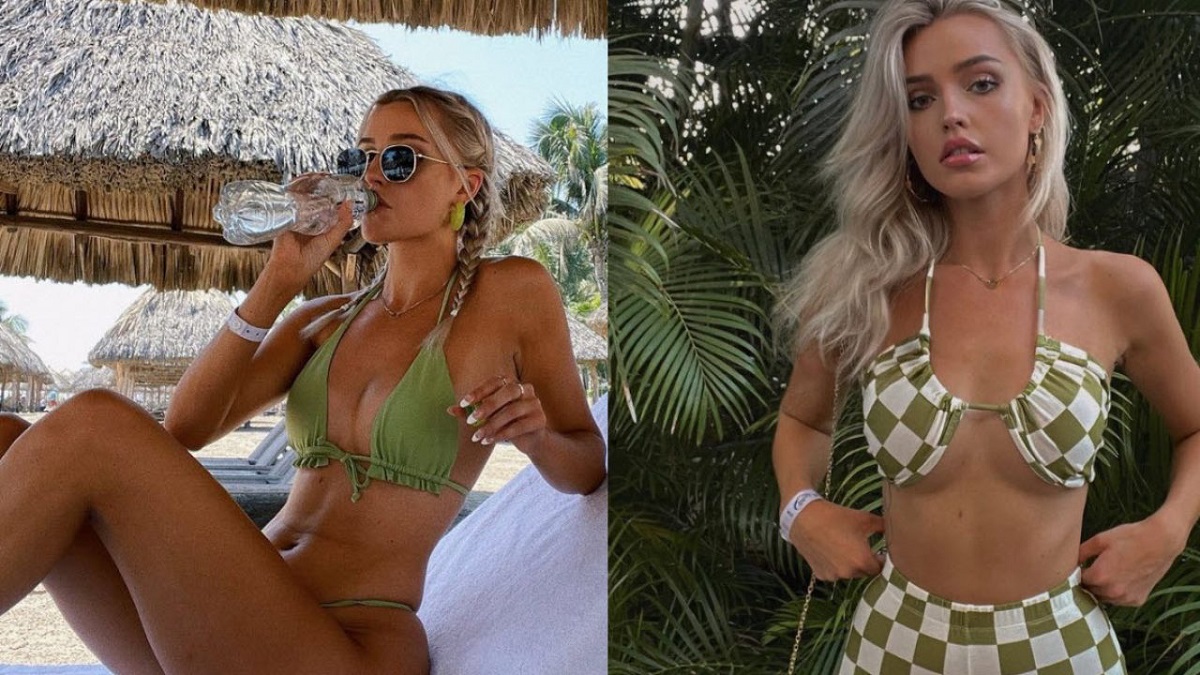 Taylor Fritz’s girlfriend (Morgan Riddle) recently opened up about how she fell in love with tennis after she started dating him. In July 2022, he was ranked as the 12th best tennis player in the world and it is interesting that exactly a year ago he achieved world number 104 in doubles. The fabulous tennis star also won the 2022 Indian Wells Masters and Masters 1000 titles. As of now, in 2022, Taylor is the winner of three ATP tournaments in singles and also started his career well as the winner of one junior Grand Slam tournament in singles (US Open 2015).

So who is the girl cheering him on the sidelines? Is she a classic influencer who sports stars of this generation target? Who is Taylor Fritz’s ex-wife Raquel Pedraza? Let’s get into it!

Known for his powerful shots on the tennis court, Taylor Harry Fritz has recently been ranked No. 12 in the world by the ATP. With such clout and reputation, who is the girl he goes home to?

As of 2022, Taylor Fritz’s girlfriend is none other than the beautiful social media influencer Morgan Riddle.

After Taylor split from his ex-wife, Raquel Pedraza, Taylor Fritz’s girlfriend reportedly started dating the tennis star as the couple was often seen enjoying dinner parties or on vacation.

But prior to meeting Morgan, Taylor Fritz married the famous tennis player Raquel Pedraza after he proposed to his then-girlfriend in front of the Eiffel Tower.

Taylor Fritz and Raquel Pedraza first dated in 2015 and after dating for a while, the beauty was quick to say yes to an intimate ceremony on July 7, 2016, in Taylor’s hometown.

The couple was blessed with a beautiful son and they keep parenting the child today as they separated in 2019. The tennis playing couple did not reveal the reason for their separation. Due to their quick separation, Taylor Fritz’s girlfriend might not receive a proposal too soon.

2. Who is Morgan Riddle?

America’s very own Taylor Fritz, who fell in the quarterfinals against Rafael Nadal, noticed the global attention of his social media influencer girlfriend. While many discussions about the pain in the abdominal muscle that the Spaniard had to endure kept going, others paid attention to Morgan Riddle, the American’s girlfriend. On more than one occasion, the blonde could be seen banking the 24-year-old in the stands for his coach and the rest of the family. She was serious and attentive throughout the match on Center Court. As the final set approached, she was seen cheering him on and making gestures in celebration of some sensational points. But who is the 24-year-old?

Without a doubt, Taylor Fritz has stolen the hearts of millions of girls, but there is a beauty that rules his heart.

Morgan Riddle has been the official girlfriend of the American tennis player for two years. The couple has been dating since June 2020 and around a year later, the tennis player made a post celebrating their one year anniversary.

Taylor Fritz used his Instagram account to thank his girlfriend for her support. On her first anniversary, he shared a photo of her with the caption, “It’s been a year already? I seriously can’t believe time is flying by so fast. I don’t know what she would have done without you.” He also added: “I am very grateful that you are a part of my life. Thank you, Morgan Riddle.

Morgan Riddle is a social media influencer who models on the internet. On TikTok, where she is often seen most active to share some moments of Fritz’s career, she once wrote:

“I’m Morgan, and I traveled the world on the ATP tour with my boyfriend, the highest ranked American tennis player.

As you can tell, she is quite active on social media and has a decent following. Riddle enjoys around 97 thousand followers on her Instagram account as of July 2022.

She graduated from a university in New York. In addition to modeling, Morgan is the Media Director at Gamers Outreach which is a charity that works to provide video games to hospitalized children in the USA. Additionally, she has served as the media director for Love Your Melon, a clothing store.

Over the years, she has enjoyed more success as an influencer, where she always shows the outfits with which she goes out to different sports shows. After her high-profile relationship with Taylor, Morgan saw her followers practically double in less than a week, where she had 45 thousand fewer.

In one of her interviews, Morgan revealed how he fell in love with tennis. She said: ‘I didn’t know anything about the game. I was practically an acquaintance. However, once I get to know Taylor, I love playing tennis.” They grow stronger over time and cherish their blossoming romance.

As an already established couple for two years, it is known that Morgan is well acquainted with the child of Taylor Fritz and his ex-wife.

In conclusion, Taylor Fritz’s girlfriend was seen supporting her man on more than one occasion, in tournaments such as the Masters 1000 in Indian Wells, where she was one of those who were present. At Wimbledon, the tennis player defeated Alex Molcan in the third round to reach the fourth round for the first time in his career but during the quarterfinals, he pushed Rafael Nadal, to five sets, but in a losing effort lost the match in a fifth-set tiebreak. Will she bring him better luck in the remainder of the 2022 calendar? Let’s wait and see!

Taylor Fritz and Morgan were both born in 1997:

The winner of three ATP tournaments in singles was born as Taylor Harry Fritz on October 28, 1997. Morgan was also born in the same year.

Taylor was born and raised in Rancho Santa Fe and developed an interest in tennis very early on. Taylor grew up playing and shooting. He is considered one of the best tennis players today. The right-handed player stands at the height of six feet five inches. His height adds to his playing skills.

He was born into a tennis-playing family:

Taylor’s mother Cathy May (who would later change her last name to Fritz) was the 10th ranking among women in the late 1970s. She also played in the quarterfinals of Grand Slam tournaments, and Taylor’s father Harry Fritz was a tennis coach.

Taylor Fritz ended his junior career in 2015. During this year, he played eight junior tournaments, including all four Grand Slam tournaments, in each of which he reached at least a quarter-final (1/4 finals at the Australian Open, final at the French Open, semi-finals in singles and doubles at Wimbledon and the US Open).

Taylor Fritz has won three ATP Tour singles titles, including the Masters 1000 title at the 2022 Indian Wells Masters. The American professional tennis player reached his first ATP final at the 2016 Memphis Open, only the third event in his career. John Isner is the only other American who made it to the ATP finals in fewer career events.

Prior to this, played his first ATP World Tour tournament at the ATP 250 Nottingham in June 2015 and received a wildcard. Taylor Fritz won his first ATP game by beating Spaniard Pablo Carreno Busta, but couldn’t celebrate too much as he had entered the court hours later and could not resist the third favorite and 16th place in the world, the Spaniard Feliciano Lopez, by a double 6/3.

Fritz vs Nadal, a match won with an ankle injury:

In March 2022, he won the Masters 1000 in Indian Wells by beating the world’s 4th Rafael Nadal but this would be a shock to him 2 years ago as at the beginning of 2020, Fritz represented the US team in the ATP Team Cup, but lost two out of three meetings in the group stage.

In the Australian Open, he was stopped in the third round by Dominic Thiem – the fifth ranking  in the world. However, in February in Acapulco, the American reached the first final of the ATP 500 category tournament in his career, defeating Isner in the match of the best players in the United States and then losing only to second place in the world ranking Rafael Nadal.

He overcame a very good Miomir Kecmanović and Taylor Fritz qualified for his first Masters 1000 final following his victory (7-5, 6-4) against Andrey Rublev who gave him a sore ankle.

Opposed to the 4th world Rafael Nadal, unbeaten 20 games in a row since the start of the 2022 season, Fritz is in doubt before the match because, during his opposition against Rublev earlier, he was feeling pain in the right ankle. His pain worsened in training a few hours before the final, but he decided to play it, despite the disagreement of those around him.

Strapped, however, he is immediately superior to his opponent, also physically impaired and who will have recourse to a medical time-out. He won the first set 6-3 against Nadal who had won three tournaments in quick succession, including the Australian Open,

Soon, Nadal regains his prowess in the second set and reaches the tie-break. Fritz became the first American to win Indian Wells since Andre Agassi in 2001 because the young American was the most consistent in this last decisive game, which he won 7-5 to win (6-3, 7-65) in just over two hours of play.

Moved by his success, he reveals that he felt pain the whole match: “If I had known it was going to be so terrible, I wouldn’t have come here. I took a few steps to change direction and I shouted, and honestly I was trying to play tough because I had cameras on me”, stated the bull-headed tennis star.

In 2021, the American did not go beyond the third round in the Grand Slam tournaments, but played five times in the semi-finals of the ATP tournaments, including in October – in the Masters tournament in Indian Wells, postponed until the fall, where he defeated two rivals from the top ten ratings along the way: (Alexandra Zvereva and Matteo Berrettini), as well as the 14th ranking of the world, Yannick Sinner.

As the runner-up in Memphis, Taylor Fritz, then No. 102 in the ATP, faced fellow countryman Tim Smyczek, then No. 129 in the world, 2 days after his last match in a game valid for the first round of the ATP 250 in Delray Beach, United States.

Even though Fritz was eliminated from the tournament after losing to Smyczek by a double 6/3, he defeated Manuel Sanchez and Adrián Menéndez in straight sets 7 days later.

Because of the straight-set victory, Fritz skips the qualifier and advances to the ATP 500 Acapulco main draw.

During the first round, Fritz secured entry into the top 100 of the world rankings. The spot in the elite group of the circuit came with a victory by 6/4, 3/6, and 6/3 against Frenchman Jérémy Chardy, 30th in the world.

“This is a big milestone for me. I’ve come this far and I want to keep climbing,” stated Fritz when asked about his achievement. The American professional then had an authentic generational duel against the Dominican Republic in the form of Víctor Estrella Burgos right in the second round. And Fritz showed again his potential by taking out the experienced Dominican, by easy 6/1 and 6/3, in 61 minutes. However, in the next match, Fritz was eliminated by the American Sam Querrey, who was coming from the title in Delray Beach, during the quarterfinals of the ATP 500 in Acapulco with partials of 2/6, 6/4, and 6/4.

Even eliminated, that campaign took the young Fritz to 81st place in the rankings, 21 places better than the one he held the week prior.

Taylor Fritz’s Wife: Who Is His Ex Raquel Pedraza, The Fellow Tennis...

10 Strangest Bets Ever Made in the History of...