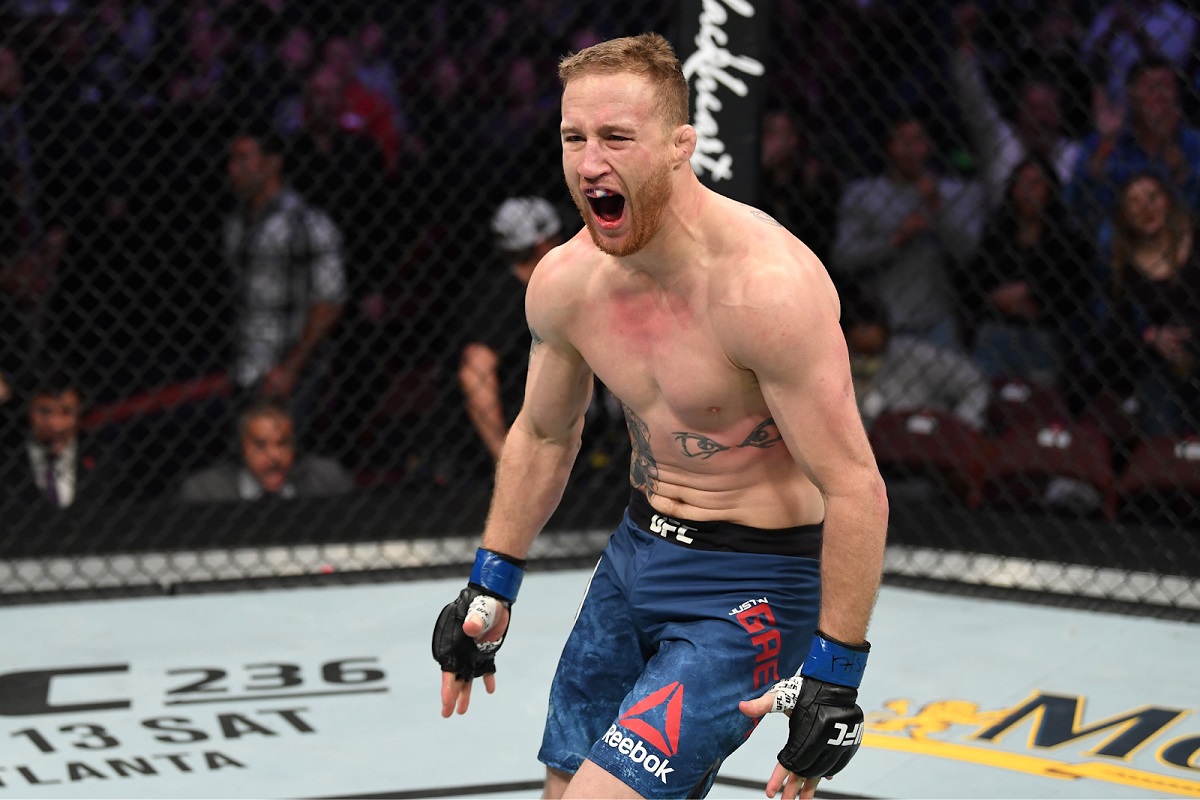 Justin Gaethje is an American professional mixed martial artist best known for being the interim UFC Lightweight Champion. As of 2022, Justin Gaethje’s Net Worth has been listed at $4 million. Let’s take a look at how he developed this income because the Arizona native came from humble beginnings with a strong capability to wrestle that had no discrimination.

Justin Gaethje’s Net Worth: From Highschool Wrestling To MMA!

Justin Gaethje’s net worth is estimated at $4 million, according to 2022 statistics. From his UFC career, Gaethje is believed to have made as much as $2,874,500.

As of May 10, 2022, he is #3 in the official UFC lightweight rankings which will add to his value in the business. Another thing that adds to his net worth is the fact that he finished 19 of his 22 victories by knockout or technical knockout and won Fight of the Night five times and Performance of the Night four times in his seven fights for the UFC. This could be because despite his wrestling background, Gaethje rarely seeks takedowns and is known for his aggressive standing fighting style.

Although Gaethje remains a pressure fighter, Wittman (his coach) says the back-to-back losses to Alvarez and Poirier prompted his athlete to change his mindset to less risk and choose more when to trade punches.

The wrestler now makes more money entertaining fans, stating that: “You can see guys on the circuit 13-0 out of 13 decisions barely making $5,000 to fight because no one is watching. I got opportunities on the biggest stages because of the way I fought. There wasn’t a moment when I didn’t want to win a belt but I wanted to make money and the surest way to make it in this sport was to make a splash”.

What is Justin Gaethje’s salary?

According to statistics taken in 2022, Justin Gaethje’s net worth will grow to about 4 Million. This is a relatively low net worth compared to other athletes. As the complete value of Justin Gaethje’s salary is not disclosed, we cannot give you an exact value but we know that just from his MMA career alone, Gaethje has made $2,874,500 approximately.

This salary count was noted during a 2020 ESPN interview, when Gaethje stated that he realized after transitioning from wrestling to mixed martial arts that while winning was still important, entertaining the fans could earn him more money – and this is exactly what he did with his fight to face Tony Ferguson for the interim UFC Lightweight Championship at UFC 249.

In April 2020, Tony Ferguson (despite having lost) was the one who won the most on the evening, while Gaethje came close in numbers thanks to the two bonuses he earned for developing the best fight on the card and having one of the best performances of the night. In total Justin had earnings of $380,000 USD.

When was Justin Gaethje born?

Justin Gaethje’s age is approximately 33 because he was born on November 14, 1988 in Safford, Arizona. His mother, Carolina, was a postmaster of Mexican descent, while his father, John Ray Gaethje, was a copper miner of German descent. His full name is Justin Ray Gaethje and the surname Gaethje is of German origin, his father being German-American.

Gaethje started wrestling at the age of four. He was a two-time Arizona State Wrestling Champion as a student at Safford High School.

How much money was at stake for Justin Gaethje at UFC 254?

In the long-awaited fight at UFC 254 where Justin Gaethje failed to beat Khabib, there was a lot of money up for grabs. In one website, it was stated that in the salary list for the main card of UFC 254, Justin Gaethje obtained a guaranteed $600,000, money to which was added a $30,000 promotional bonus. While for the same fight Khabib Nurmagomedov took more than three million dollars. According to Wikipedia, in all of Gaethje’s extensive career, this fight was the first fight in which he did not receive any bonuses.

How much money did Justin Gaethje make at UFC 249?

Martial arts fighter, Justin Gaethje stepped into the octagon at UFC 249, a highly anticipated event in 2020 because it was the first of the year in the context of the coronavirus pandemic (The American MMA fighter battled on May 9, 2020 at the VyStar Veterans Memorial Arena in Jacksonville, Fla.).

Speaking of money, Tony Ferguson was the one who won the most on the evening (despite having lost), while Gaethje came close in numbers thanks to the two bonuses he earned for developing the best fight on the card and having one of the best performances of the night. In total Justin had earnings of 380,000 dollars.

The girlfriend of Justin Gaethje is currently non-existent as the man is very private about his life. Perhaps he will reveal the name of the girl if the relationship is serious enough to share with the world.

Justin Ray Gaethje was born on November 14, 1988 in Safford, Arizona. He would go on to become an American professional mixed martial artist competing in the Ultimate Fighting Championship (UFC).

Gaethje graduated from Safford High School with a record of 191-9 and this was also the year that Gaethje made his MMA debut as an amateur on August 2, 2008. He amassed an undefeated record of 7-0.

Gaethje went 5-2 at the 2010 NCAA Division I 157-pound Championship as a junior fighter to earn a seventh place and All-American status.

Born in Safford, Arizona, Gaethje began wrestling when he was four years old and finally debuted his amateur MMA career while studying at the University of Northern Colorado.

This was also the year that Gaethje made his professional debut on August 20, 2011 against Kevin Croom. Via TKO, he won the fight in the first round. The Arizona native won his next four fights after going 5-0, Gaethje next faced UFC veteran Drew Fickett. He knocked out Fickett in just 12 seconds into the fight.

Gaethje was signed for the World Series of Fighting on December 2, 2012, and made his debut on March 23, 2012, at WSOF 2 against Gesias Cavalcante, ending the fight in the first round via technical knockout (medical stoppage) after opening a cut above Cavalcante.

On June 14, 2013, he fought Brian Cobb at WSOF 3, eventually winning via third-round leg kick TKO. Gaethje subsequently fought Dan Lauzon at WSOF 6 on October 26, 2013, finishing Lauzon via knockout with a right uppercut in the second round.

The three knockout victories secured Gaethje a shot at the inaugural WSOF Lightweight Championship, in the WSOF 8 main event against Richard Patishnock on January 18, 2014.

On January 18, 2014, in the main event of the evening, Gaethje defeated Richard Petishnock by technical knockout and became the owner of the WSOF lightweight championship belt aka the WSOF Lightweight Champion. Then, his first title defense came at WSOF 11 against Nick Newell on July 5, 2014. Gaethje won the fight with a second-round TKO right hook.

Gaethje defended his title by stopping Palomino by third-round TKO after a combination of kicks and punches and after that, Gaethje had a rematch against Palomino on September 18, 2015, at WSOF 23. Here, he defended his belt again, finishing Palomino in the second round via TKO.

On October 7, 2016, the Arizona native was expected to defend the WSOF Lightweight Championship against Ozzy Dugulubgov at WSOF 33. However, the fight was canceled on the day of the event because Dugulubgov was ill. On October 17, 2016, it was announced that Gaethje would defend the WSOF Lightweight Championship against João Zeferino on December 31, 2016, in the main event of WSOF 34. Gaethje underwent an eye surgery in 2016 to correct his poor eye-sight.

This was the year in which Gaethje lost a back and forth fight via fourth round TKO to Dustin Poirier on April 14, 2018 at UFC on Fox 29. The match earned Gaethje his third consecutive Fight of the Night award and bonus.

As a two-time Arizona State High School Champion and NCAA Division I All-American, Gaethje has some of the best wrestling credentials in the UFC’s lightweight division. Further, Justin Gaethje began his winning streak in mixed martial arts: on August 25, 2018, Gaethje won by knockout against James Vick.

When asked about his strategy for a possible fight with Khabib Nurmagomedov, Gaethje said that he would force Nurmagomedov to attack with him.

It was announced that Gaethje was selected on short notice as the replacement for Khabib Nurmagomedov to face Tony Ferguson on April 6, 2020. This match was for the interim UFC Lightweight Championship on April 18, 2020, at UFC 249.

By TKO in the fifth round, Gaethje won that fight thus becoming the interim UFC lightweight champion and snapping a 12-fight win streak by Ferguson. After the fight, Gaethje received the award for Best Performance of the Night and Best Fight of the Night.

On October 24, 2020, at UFC 254, Gaethje contested the world lightweight title against undefeated champion Khabib Nurmagomedov but in a losing effort, Gaethje lost via technical submission in the second round. This would be the first fight in Gaethje’s career in which he did not receive any bonuses.

At UFC 268 Gaethje faced Michael Chandler on November 6, 2021. He won the bout by unanimous decision. This bout earned him the Fight of the Night award.

Is Terrel Williams Still Getting Threats After Paralyzing Prichard...

Taylor Fritz’s Wife: Who Is His Ex Raquel Pedraza,...