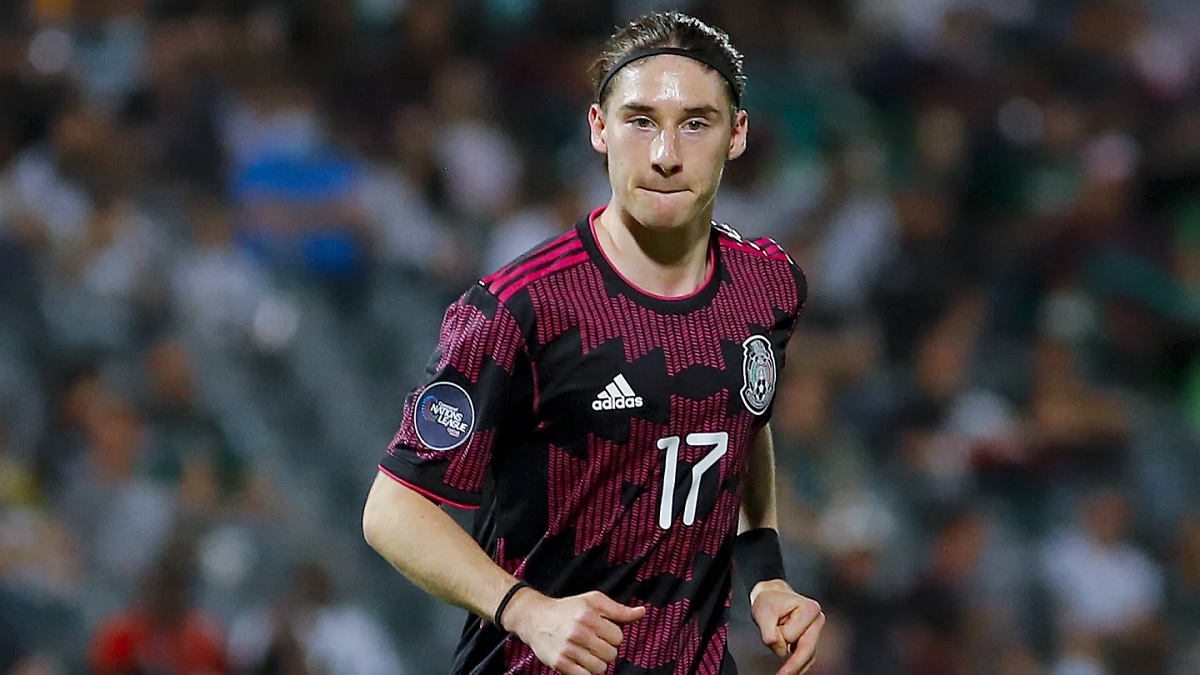 Marcelo Flores is considered one of the greatest prospects of Mexican soccer, and at a time when the Mexican National Team lost its title as “the giant of Concacaf” ahead of the Qatar 2022 World Cup, his arrival at the senior team couldn’t be more timely. In this post, we will take a quick look at Marcelo Flores’ bright and young career so far. Let’s get started.

Marcelo Flores: All You Need To Know

While the Mexican National Team starred in another setback against its counterpart in the United States, the U-20 Tricolor continued to take strong steps in the Revelations Cup Mexico, with young midfielder Marcelo Flores being the architect of this team.

If you still don’t know him, you better keep reading because the young Mexican is aiming for big things and could be the spark that El Tri needs for the Qatar 2022 World Cup.

Who is Marcelo Flores?

How did Marcelo Flores start his soccer career?

Marcelo Flores’ path in soccer began at a very young age, since his father was the coach of the Cayman Islands women’s national soccer team, Flores spent time on the islands, where he was invited to a training camp by Steve Foley, the youth development coach for Ipswich Town, England’s third tier professional football team. During the week-long camp, the Mexican left scouts feeling good and joined the English club’s academy.

After three years at Ipswich, Marcelo Flores joined Arsenal’s academy in 2019 on a free transfer. With the Gunners he made a brilliant start to the 2020–21 campaign with the under-18s, scoring three goals in two matches.​

After playing his first game in the Premier League, he signed his first professional contract in October 2020. The Mexican midfielder, who can also play as a striker, started the 2021-22 season in great shape with a record of three games played and four goals scored (on matchday 1 a hat-trick was scored against Aston Villa and on matchday 2 he assisted for a goal against West Bromwich).

Which countries is Marcelo Flores eligible to represent?

Marcelo Flores is eligible to represent Canada, England, and Mexico. The first to consider him for a national representative were the English, who called him up to the England under-16 team in 2019, however, he decided to join the Mexico under-16 team in the same year, playing every game of the season.

In December 2020, Flores accepted a call up to a Canada camp due to take place in January 2021 but later withdrew to remain at Arsenal.

On June 18, 2021, Flores was named to Canada’s 60-man provisional squad for the 2021 CONCACAF Gold Cup, however, Marcelo Flores declined the invitation and later decided to report to the coach of the Mexican National Team in the under-20 category to compete in the 2021 Revelations Cup, an international friendly tournament for Under-20 soccer, organized by the Mexican Football Federation.

While the Mexican National Team made a tremendous impression against their peers in the United States last Friday, Marcelo Flores grabbed the spotlight a day later with the goal he scored for Mexico U-20 to beat Brazil 2-1 in the Revelations Cup. The foregoing caused the fans to request the young Mexican from Arsenal on social networks for the senior team.

Luis Perez, coach of the Mexican Under-20 National Team, hoped that Flores’ qualities are sufficient to reach the senior squad as soon as possible, which is led by Gerardo “Tata” Martino.

“We all know the ability of Marcelo Flores, along with that of the other youngsters. They have a process in the National Team, but hopefully, he and the other players can have a chance in the major,” Perez said at a press conference.

What did Mexico’s national team coach say about Marcelo Flores?

Marcelo Flores had a sizzling debut with the Mexican national team. While he performed very well, he wasn’t able to punctuate his debut with his first goal for El Tri. After the match, his coach Gerardo Martino had a lot of praise for the youngster. Here’s what he said:

“Marcelo is everything a coach expects, that the player has those desires to assert his dribbling, he does what we all expect of him, he executes the ‘one on one’, which is one of the best qualities and the penalty is anecdotal,” Martino said.

“It’s fine…We had Santi, Chávez and Orbelín, Santi decided to give it to him and the boy is in the dressing room crying inconsolably, and it’s sad because this career has many disappointments, but everything that happened is well, everything is experience and everything is knowledge; Marcelo is something different, he needs peace of mind and hopefully they can give it to him,” concluded Martino.

The Arsenal player showed his great quality which has led him to be in the junior side of the legendary London team.

For his part, Marcelo Flores was satisfied with the goal he scored and put the Tricolor at the top of the Revelations Cup with four points thanks to the victory over Brazil and the 0-0 draw against Colombia.

“For me, it is a pride to represent this country and thank you all for coming to see me, it means a lot to play with this team, score a goal and celebrate with me,” Flores told reporters.

At a time when Mexico suffers more from a lack of goalscorers, and looks weak and clueless in attack, Marcelo Flores could be the shining beacon that El Tri needs, at least that is what the fans believe.

From a very young age, he knew that football would be his life. That his talent with the ball was something special and that he had to take advantage of it. This is the story of Marcelo Flores, a player of only 18 years who is already an established figure with Arsenal U-23 and could make a massive mark with the Mexican National Team.

His situation is very peculiar. He was born in Georgetown, Ontario, Canada. His mother is Canadian, of English descent. His father is Mexican. With this Marcelo was born with triple nationality. Although he has only played with the Mexican National Team in lower categories, he can still decide to represent Canada or England definitively.

When was Marcelo Flores born?

He was born on October 1, 2003. He was barely 18 years old and was already causing a stir for his talent. Marcelo said that he inherited his love for soccer from his father, Ruben Flores, who was also a soccer player. Thus, when he was a child he began to develop his talent. Despite not being very tall (1.65 metres), he is capable of making a difference on the pitch due to his dribbling, his passing intelligence and his finishing talent.

When he was 15 years old he came through the youth ranks at Arsenal. His great talent led him to move up the categories quickly. At 16, he was already the undisputed starter in the U-18s. This caught the attention of his coaches and now, at 18, he is part of the under-23s and is also immovable in the team. In fact, he has already scored several goals and assists.

In fact, it is said that Mikel Arteta himself (Arsenal coach) has followed him closely. If his performance remains this outstanding, he could make his debut in the Premier League at a very young age. Today he is worth 600,000 Euros (the second most expensive player in England’s lower divisions), but when he moves up to the first team and debuts with an official team, this figure will increase considerably.

He has already been summoned to the senior Mexican National Team, however, it has been in friendly matches. Because FIFA does not consider these matches to be official tournaments, Marcelo is still free to play for any other team. For Mexico to be able to tie up the young promise, the national team coach must give him minutes in some official competition.

The story of Marcelo Flores, the figurehead of the Arsenal Under – 23 and a possible player of the Mexican Senior National Team is just beginning. At his very young age, there are endless possibilities ahead. For now, his talent speaks for itself.