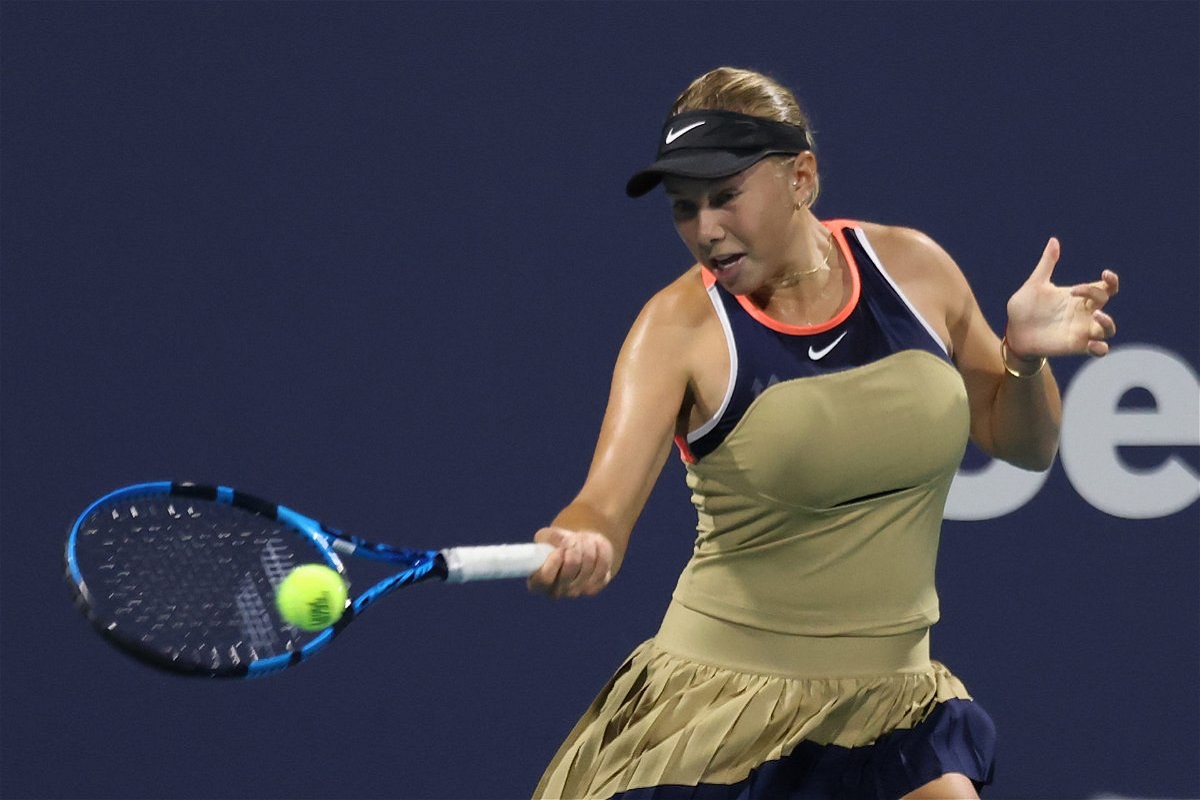 Semi-finalist of Roland-Garros in 2019, at only 17 years old, America’s very own Amanda Anisimova won the Bogota tournament. It was her first on the WTA circuit after she defeated Australian Astra Sharma in 3 sets. Arriving at the 21st rank in the world in 2022, she has scaled the tennis world consistently. Therefore we decided to look at the things that Amanda Anisimova did this year, and where her future will lead.

Anisimova started the season at Melbourne Summer Set 2 and reached the final, her first appearance in the final since 2019. She won the title by defeating Alexandra Sasnovich.

Amanda Anisimova after beating Coco Gauff at Wimbledon couldn’t hide her joy and said it was special to beat a major on her Center Court debut. The American tennis star stepped onto center court at Wimbledon for the first time in her career. In her first match on Center Court, Anisimova defeated 11th seeded Gauff 6-7(4), 6-2, 6-1. “It’s the first time I’ve played on Center Court. This is the most special day, I think, of my career,” Anisimova said during her on-court interview, according to the WTA website.

“It’s a great privilege to play on this ground against Coco. She is an extraordinary player and she has just reached a Grand Slam final. Before the game, I was just trying to prepare myself to enjoy this moment, whether it was won or lost.

Winning today is very special. I think the worst thing for a tennis player is to lose 7-6 in the first set….. It’s very important to bounce back and give everything I have. It was very easy to do it, especially on this terrain, even if it was extremely tiring”.

Gauff bounced back after losing the first set despite starting the game strong, taking a 3-0 lead. Anisimova was quick to respond, earning back-to-back breaks and winning four games in a row to take a 4-3 lead.

In game eight, Anisimova lost the opportunity to win her fifth game in a row when Gauff broke and tied the set at four games. As there was no more break, the first set ended in a tie-break, in which Anisimova took a 4-1 lead before dropping six straight points and conceding the opener.

After losing a tight first set at the 2022 Wimbledon Championships, Anisimova recovered in the second, in which she broke Gauff three times to force the decision. In the third set, both players were tied at one game before Anisimova earned two straight breaks and won five games in a row to pull off a strong comeback.

For the first time in her career defeating Harmony Tan she reached the quarterfinals at this Major but during the quarter-finals, and in a losing effort, she had to give up to Simona Halep in straight sets.

Although in Doha, she lost in the second round to Elena Ostapenko, during the 2022 Mutua Madrid Open, she reached the quarter-finals, beating two Belarusian tennis players (Arina Sabalenka and Victoria Azarenka) en route to the top 10.

In the quarterfinals, she lost to Ekaterina Alexandrova.

February: She moved up 19 positions in the WTA rankings

During the Australian Open, Anisimova bounced back from a one-set deficit and saved two match points in the final set to defeat defending champion Naomi Osaka in three sets in the third round. This was the second time she had beaten a defending champion in a major tournament, after defeating Simona Halep at the 2019 French Open. She then lost to world No. 1 Ashleigh Barty in the fourth round. As a result, she moved up 19 positions in the rankings to become #41 on January 31, 2022.

Anisimova ended a 14-game losing streak against the top 30 WTA players and won her second WTA title at the Melbourne Summer Set 2 in January 2022 at age 20.

In January of this year, Amanda Anisimova reached her first final in three years and aimed for the second WTA title of her career in Melbourne. For the first time since 2019, the young American Amanda Anisimova (20) qualified for a WTA circuit final in Melbourne by outclassing the Russian Daria Kasatkina (6-2, 6-0). The American Amanda Anisimova (then 78th now 21st WTA) only needed 56 minutes to get rid, in the semi-finals of the WTA 250 tournament playing her first final since the one won in Bogota in April 2019.

Other Facts and FAQs About Amanda Anisimova

What happened to Amanda Anisimova’s father?

Anisimova had then had to manage more very bad than good moments, with mainly the sudden death of her father, at 52 years, at the end of the summer of 2019, then repeated injuries.

Who is Amanda Anisimova’s trainer?

Trained by Frenchman Romain Deridder (ex-coach Leylah Fernandez), Amanda Anisimova, has also benefited from the advice of experienced Australian Darren Cahill, a technical reference (long collaboration with Simona Halep in particular) with whom the current seems to pass: “We have just started and we are getting to know each other”…. indicated the American. “We’ll see where it takes us; hope it becomes a long-term collaboration. I hope that will be the case”.

How old is Amanda Anisimova?

Amanda Anisimova is currently 20 years old in 2022. One thing to note is that the superstar athlete refuses to talk about her age. “I don’t know who did what at my age, “I don’t ask myself questions about my age,” says Anisimova. People talk to me about it and I forget a second later because I don’t really care. I don’t ask myself questions about my age. Nor on her tennis: the American is rushing at full speed towards new records. Since the start of the Roland-Garros fortnight, Anisimova has not lost a set. Simona Halep has been warned.

As a good American, Amanda Anisimova celebrated her qualification for the Roland-Garros quarter-finals with a burger and fries! And yet, Anisimova, an unconventional name for an American. Olga Anisimova and the late Konstantin Anisimov, the parents of the 51st player in the world are Russian, originally from Moscow, and emigrated to New Jersey, in the northeast of the United States, a few years before August 31, 2001, date of birth of Amanda.

When the future champion turns 3, the family moves to Florida, where the weather is milder and where tennis is played all year round. The father, Konstantin, takes care of his daughter before enrolling her, at 11, in the academy of Nick Saviano, well known in the microcosm of tennis and former coach of Sloane Stephens, finalist at Roland-Garros in 2018.

Florida is also the region in which Serena Williams grew up, one of the idols of the young Anisimova. “I recently lost a game in Miami, I was really pissed off in the locker room and Serena came to see me for a little chat. It was really nice of her and I will remember it forever”, said the tall blonde (1.80 m).

Net worth and income:

Not yet 18 and already in the quarter-finals of Roland-Garros, after an 8th final at the Australian Open in January, Anisimova also won her first major title, in Bogota (Colombia), in April. She can already boast of having accumulated almost $650,000 in winnings just thanks to her tournaments. She has an estimated net worth of around $2 million from her athletic career. Additionally, she won approximately $2,038,276 in prize money. She signed a contract in 2020 with sports-themed beverage and food maker, Gatorade.

In terms of sponsorship, Anisimova is part of the Nike team, which quickly bet on the winner of the US Open junior (2017). This a sign that the two-handed backhand right-hander is not just a “hope” but undoubtedly one of the future best players in the world. In addition, the athlete also uses Babolat rackets.

Colin Kaepernick’s Net Worth Before And After His Controversy...