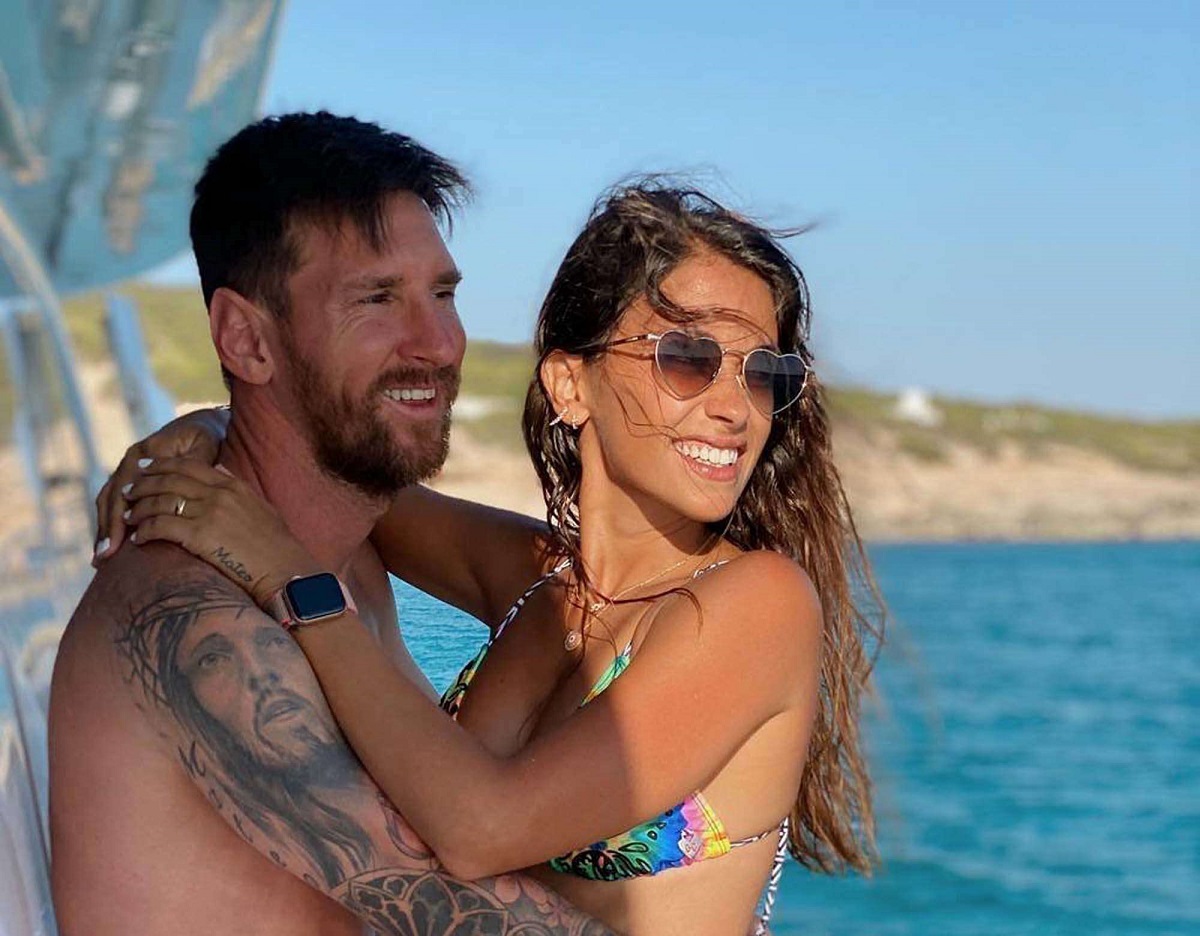 Some football players parade with an actress, singer, or supermodel on their arm. Not Lionel Messi. The eight-time Ballon d’Or is married to his childhood sweetheart, who has become the mother of his three children. A beautiful and solid love story. At 34 in 2022, Antonella Roccuzzo is the wife of Lionel Messi, the Argentine player with 8 Golden Balls. A story that lasts and which was materialized by the arrival of three children, and a sumptuous wedding in 2017 in Rosario, their hometown to both, located 399 kilometers from Buenos Aires. But who is Antonella Roccuzzo, who until now was very famous among the wives of Barça footballers?

1. Lionel Messi’s wife knew him since she was eight years old:

The daughter of a businessman, owner of a supermarket chain, and a stay-at-home mom, Antonella met Messi in 1996, when he was 9, and she was 8.

Lionel Messi is a professional footballer, who currently plays for Ligue 1 team Paris Saint-Germain and the Argentina national team but  “I knew Leo before he was famous as Messi”, is something we assume Antonella Roccuzzo will say.

As a teenager, when Messi lived in Barcelona, ​​Antonella had a boyfriend before the romance began with the future Ballon d’Or. Messi’s friends say that from Barcelona he maintained the bond by calling Antonella regularly, even sending her letters, until the death of Antonella’s best friend in a traffic accident brought them closer together. It was in 2009 that Lionel Messi, then 21 years old, formalized his romance with her.

2. The marriage of Antonella Roccuzzo and Lionel Messi:

The lovely couple finally tied the knot after almost a decade of dating at the luxurious hotel named Hotel City Center in Rosario. Many famous stars attended the couple’s wedding such as Cesc Fabregas, Carles Puyol, Xavi, Sergio Aguero, and all of Messi’s Barcelona teammates including one of his best friends Luis Suarez and Sofia Balbi, his beautiful wife.

“We have always had memories of Antonella in the neighborhood as Leo’s girlfriend,” Franco Lentini, a neighbor, told AFP in 2017, on the occasion of Messi’s wedding in 2017.

“This love was born when they were little,” assured another neighbor, Diego Vallejos, a friend of Messi. For him, the couple is very well matched: Antonella has the same simple tastes as the champion and the same sense of dodging the spotlight.

The Argentinian beauty seems to be very shy or private we should say by dodging the spotlight.

However, she is also a combination of beauty and being Messi’s number one fan. Antonella has been spotted cheering on her husband, always by his side supporting him wherever he goes, on several occasions including the most important when Lionel won the Ballon d’Or eight times which is a record and Antonella was at his side both times as no other player has managed to win it so many times.

Antonella who was born on June 24, 1987 has a zodiac sign of Pisces which means she is a very creative and talented person. Usually, people born under the sign of Pisces are known to be very dreamy and romantic as well as empathetic and generous.

In 2010, the young woman left the University of Rosario, where she was studying nutrition, to move to Barcelona. Despite a short break in 2011, Antonella Roccuzzo lives happy days in the Catalan city. She is the mother of 3 boys: Thiago, born in 2012, Matteo, born in 2015 and little Ciro, born in 2018.

If she is quite discreet in the media, she does not hesitate, on the other hand, to use social networks to share many moments of their life with her fans, such as a video of her wedding, or family moments. With success: she has more than 20 million subscribers on Instagram.

Antonella Roccuzzo is famous for being the wife of the GOAT, Lionel Messi but she is also a successful businesswoman since 2017.

After graduating from college, the girl went to work in a local fitness club despite dreaming of becoming a dentist, but eventually her dream changed when she moved to Barcelona with Messi.

Antonella led a modest life without attending fashion parties but became a model.

Moreover, she never gave in to her husband’s fortune, the model has her own business with Sophia Balbi, the wife of another Barça player, Luis Suarez. They have a shoe store in Barcelona – a shop called “Sarkany”, a prestigious brand in Latin America.

Besides, Lionel Messi’s wife has managed to balance her time between business and family as she takes good care of her children and her husband.

Who Is Lee Westwood’s Wife? 8 Things To Know About Helen Storey