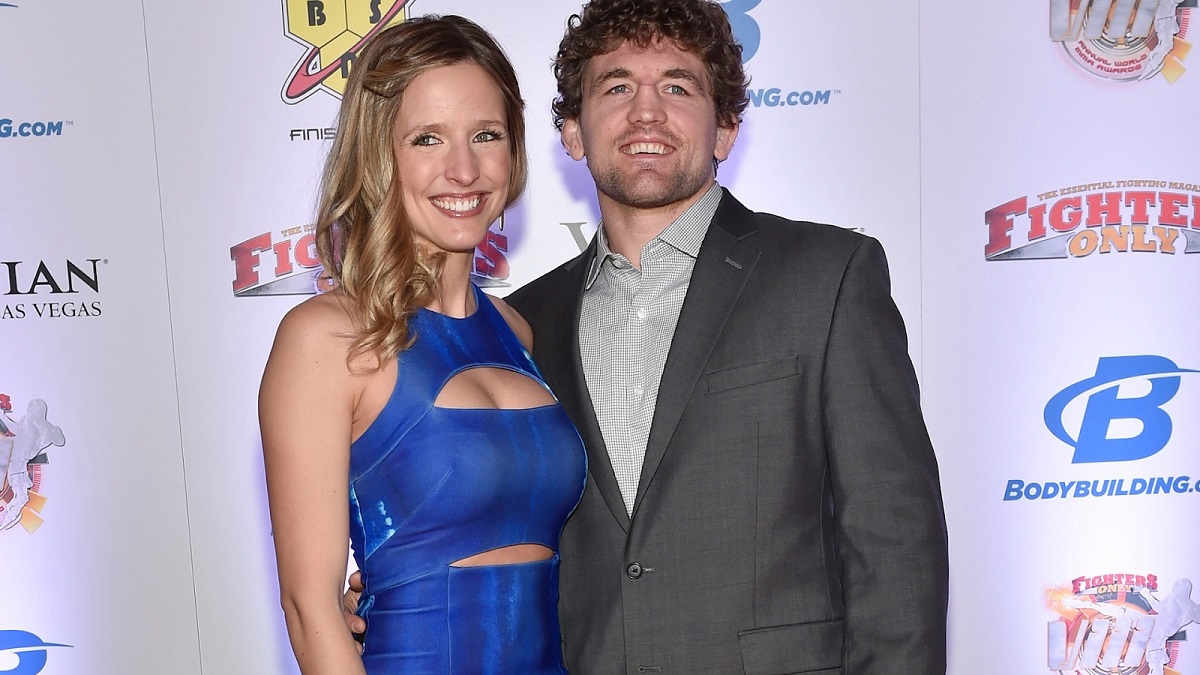 Ben Askren’s wife Amy Askren, who didn’t shy away from trash-talking with her husband’s opponent Jake Paul went viral for the collision between her husband Ben the pro fighter, and the YouTuber on April 17. After having garnered enough attention to be googled repeatedly, we decided to source facts about the wife of a former American Olympic boxer Ben Askren!

Ben Askren’s Wife Is Realtor Amy Askren, Here Are More Facts About Her!

Ben and Amy Askren tied the wedding knot on April 9, 2010. We know this because exactly 10 years later Askren congratulated Amy on their 10th wedding anniversary in April 2020.  The UFC fighter typed the following caption on Instagram: “Happy 10 year anniversary to my wonderful wife @amyaskren1 ! It’s been an amazing 10 years, looking forward to many more.”

“He really is the most mentally tough person I’ve ever met. It can sometimes be annoying when you’re feeling lazy or looking for sympathy, but mostly I’m just in awe of the guy.”

2. Amy Askren is a mom of three kids:

As of now, Ben and Amy Askren are living a happy life with three beautiful children, a son (Ozzi) and two daughters (Alex and Andy).

Back in April, Jake Paul had a new target yet came up with the same disturbing tactics. The YouTube star was getting ready to fight UFC veteran Ben Askren in his next boxing match, scheduled for April 17. Like Paul did when he tried to lure Conor McGregor into the ring, Paul involved the people outside the competition: family.

“She’s thick, like two c’s – thick,” Paul told ESPN.com’s Ariel Helwani. “Thicc like she was real thicc. So, I don’t know, I just thought she was a baddy. I do not know. I mean, maybe after beating Ben. I do not know.”

Boxers usually make fun of each other but alluding that after he was done beating Ben, Jake would give Amy a call was straight up weird.  After making such comments about Ben Askren’s wife’s body, she took it in stride and even went on Instagram to react to her new fame!

When the Youtuber tried to slide into her DMs with “weak” pickup lines, Ben Askren’s wife replied: “Since you’re doing me a favor, I thought I’d do you a favor and just let you know you need to work on your pick up lines a little bit… They were a little weak. So, thank you!”

Imagine this, Ben Askren, who was then 19-2 in his MMA career, took the oddly salacious compliment in stride. Amy also took the same attitude, posting a photo of her mini-van on Instagram with the caption “Thicc lady whip.”

4. Ben Askren’s wife Amy could have taught Jake Paul a lesson though:

But this isn’t the first time Jake took the boundaries a bit further. Paul made fun of McGregor’s fiancée Dee Devlin recently when she was trying to push McGregor into a boxing match. “What the hell is up Irish?” Paul said in a nasty Instagram post. Good morning, Conor McGregor. I know you’re probably hitting up old men in a bar right now, or maybe you’re jerking off because you’re sick of fucking your wife.

“I mean, he’s got four, Conor, you could do a lot better. Our team sent you a $50 million offer this morning…the biggest fight offer you’ve ever been offered, but you’re scared to fight me, Conor.” Paul tapped out on the McGregor fight shortly before the Irishman’s UFC 257 loss to Dustin Poirier.

Not only that, the unruly young Jake Paul arrived for the fight with his entourage in the room where Ben Askren and his wife were waiting before the fight press conference. Later, Jake entered and threw an object at them to later make fun of what he posts on social networks.

5. She uses social media to boost her career in real estate:

Regarding her social media account, she is active on Instagram and Facebook and for good reason. The licensed estate agent at Firefly Real Estate has used her famous name to get more clients for her real estate business. Ben Askren’s wife works in Milwaukee in Wisconsin. This is interesting because Funky” Ben Askren was raised in Hartland, Wisconsin, so the state is definitely their home.

She has 27,400 followers on Instagram as of August 2022 and used to be one of two people that Paul followed on Instagram in an attempt to rile Askren.

Amy Askren was born in the United States, that being said there is no information about her parents. That being said, we know that Amy has a degree in finance.

Although she now has a career in real estate soon after selling houses successfully in Tosa, she went to pursue a career in finance after getting her degree from the University of Missouri.

This is probably where she met Ben because the UFC fighter has been an assistant wrestling coach at Arizona State University and he has competed in amateur wrestling for the University of Missouri (the same uni where Amy went).

During his highschool days, Amy Askren’s husband was a two-time state champion in high school wrestling, in 2001 and 2002, while wrestling for Arrowhead High School in Hartland, Wisconsin.

Other FAQs about Ben Askren and Amy Askren:

Who is Amy Askren’s Husband?

Although Ben is currently retired( his last competition was at UFC welterweight), Amy Askren’s husband started his career as an amateur wrestler at Arrowhead High School in Hartland where he won the state championship twice. During his schooling, Ben started competing in team sports in high school (basketball and soccer), but got frustrated when he depended on his teammates’ performance, so he chose an individual sport like wrestling.

In college, Ben “Funky” Askren wrestled in the 79-kilogram (174 lbs) class. He won the National Collegiate Athletic Association (NCAA) championships twice in 2006 (the year he was named Outstanding Wrestler) and 2007. But between 2004 and 2005 he lost the NCAA Championship fight to Chris Pendleton.

Ben Askren, a former MMA fighter and Olympic wrestler won a silver medal at the 2008 Olympics. He started his professional MMA career, debuting on February 7, 2009. Furthermore, he is also a self-proclaimed black belt. In the year 2009, the welterweight champion competed in the ADCC Submission Wrestling World Championship. Ben is the 2010 Cerro Pelado freestyle international freestyle silver medalist. On December 9, 2013, he agreed to a 2-year/6-fight deal with ONE Championship. Later, on November 3, 2018, the UFC announced that he signed under the UFC and One Championship commercial contract.

Throughout his career, he has won several world championship titles such as the ONE Welterweight Championship and the Senior Silver Medalist Freestyle Internacional Cerro Pelado. Likewise, he also won the gold medal in Senior Freestyle at the 2005 Pan American Championships.

What is Amy Aksren’s husband’s net worth?

There is no information available about Amy’s profession. Therefore, it is difficult to find out his earnings and net worth. However, she lives a lavish lifestyle on her husband’s earnings. Her husband Ben Askren has an estimated net worth of around $500 million which is a steep increase since he was valued at $10 million as of 2019. Ben Askren’s main source of income is his professional career as an MMA fighter.

He has reported career earnings amounting to up to $500,000. He holds a record of 18 wins, so he must have also picked up a considerable amount of bonuses. Furthermore, he also has a luxurious house and a Rolls Royce and Lamborghini too. He also earned $350,000 for his win against Lawler at UFC 235 which is also the highest salary of his career. Furthermore, he also earned around $210,000 from the fight despite being knocked out in just 5 seconds by his opponent Jorge Masvidal at UFC 230.

Why is Ben Askren called “Funky”?

Both wrestlers Ben and his brother Max were prominent fighters with the same wild, “funky” style.

He is known for his incredible pinning ability (he has an NCAA pinning season); his huge afro, and his “funky” or unorthodox style in wrestling. For example, while being mounted at the 2005 Championship, he attempted to fence and apply a necklock to Pendleton, a move any wrestling coach would disapprove of. His tall, lean body—in stark contrast to the muscle mass of most top wrestlers—allows him to pull off moves most wrestlers wouldn’t. This trait led to some awkward moments early on in his freestyle career. Ben’s younger brother Max also wrestled for Missouri and received a National Championship when he won in 2010.

In conclusion, thanks to Ben’s unorthodox style of wrestling, no name for his style existed, so people started calling his style “The Funk”.

Where is Ben Askren now?

The former American freestyle wrestler decided to end his career as a fighter after losing to Demian Maia via rear naked choke at UFC Fight Night 162.

On December 22, 2020, it was announced that Askren would make his professional boxing debut after fighting for the MMA and UFC.

At a gala on April 17, 2021 that was built around Ben and his opponent, Askren was one half of the main match and faced YouTuber and newly minted pro boxer Jake Paul (2-0). The weigh-ins and the gala itself were commented on by boxing hall of fame inductee Michael Buffer.

Finally, the two fought after a back-and-forth on social media in a boxing match on April 17, 2021, losing by TKO which many experts questioned.

As of 2022, Ben currently trains at Roufusport in Milwaukee, Wisconsin where he is a wrestling coach.

On May 15, 2005 Askren made his disc golf debut at the Fox Valley Open and placed 33rd. Askren entered 4 more tournaments in 2009 including 10th at the Montrose Open, 8th at the Copper Mountain Open, 2nd at the Highnoon at Indiantown, and 10th at the Bayville Bash at the Beach. In 2006 Askren competed in two more intermediates, placing 3rd in the Alabama Amateur Open and 151st in the Bowling Green Amateur Championships. On May 13, 2006 Askren took a second shot at the Fox Valley Open this time placing 5th and finishing the year 9th at St. Louis Open and 46th at the PDGA Amateur Disc Golf World Championships.

On July 10, 2010 Askren made his professional debut placing 65th at the Brent Hambrick Memorial Open.

Who Is Lee Westwood’s Wife? 8 Things To Know About Helen Storey