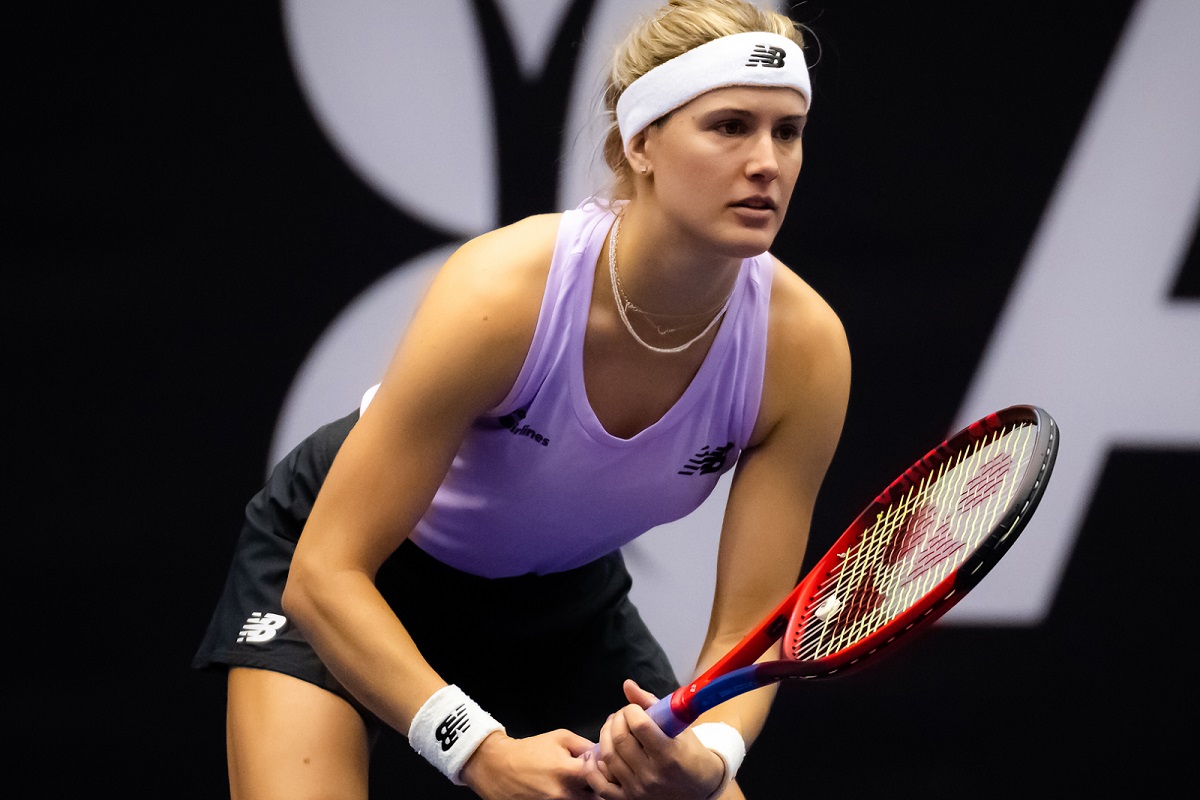 Eugenie Bouchard achieved international recognition with her 2012 Wimbledon Junior championship. She reached the singles final at Wimbledon 2014, becoming the first Canadian to reach a Grand Slam final. Her supermodel looks and tennis success made her a superstar. WTA tried to push her as the next Maria Sharapova and succeeded to an extent. However, she failed to win any Grand Slam and maximize her potential until she suffered a serious shoulder injury which made her miss 18 months of action. Now, Eugenie Bouchard is on a comeback trail, and in this post, we will find out more about it. Let’s get started.

Eugenie Bouchard: The Comeback Queen Of 2023?

What is Eugenie Bouchard’s background?

Eugenie Bouchard was born on February 25, 1994 in Montreal, Canada. She is one of the twins of Mike and Julie Bouchard. The other is fraternal twin Beatrice Bouchard, who is 6 minutes older. She also has a sister named Charlotte born in 1995 and a brother named William born in 1999. She and her twin, Beatrice, are named after the daughters of Prince Andrew, Duke of York. She was raised in Montreal with an English education at Westmount. She was known for her proficiency in Maths and Science and even considered a career as a physician.

Eugenie Bouchard started when she was 5 years old. She is a member of Tennis Canada’s National Training Center based in Montreal. She was educated at The Study and Westmount High School. At the age of 12, she moved to Florida, where she met one of her childhood best friends, Laura Robson, where Nick Saviano began coaching her. She went back to Westmount for practice when she was 15.

Two coaches are very important in Eugenie Bouchard’s life. The first is Nick Saviano, who trained her in America and the other is Nathalie Tauziat, a former French tennis player who combined her defensive style with a fearless offensive weapon in 2013 to become an ‘ALL AROUND’ player!

How did Eugenie Bouchard start her professional career?

At a statuesque 1.8 metres tall, Eugenie Bouchard participated in the first tournament of her career in France in 2005. She played well in various ITF singles and doubles tournaments in Costa Rica and Burlington in the following periods. She won the Canadian Under-18 Indoor Tournament in Toronto when she was just 15 years old. The following year she took her first professional main table win of her career in Italy.

In 2009, she became the first Canadian to reach the grand slam final by eliminating world number 3 Simona Halep in the semi-finals of WTA and lost in the final.

She won her first professional title in Australia. She won her second championship in April 2011 in Croatia. Due to injury, she was unable to participate in the French Open. She was eliminated in the quarter-finals at Wimbledon. In Girls Doubles, she became the Wimbledon champion with her partner Grace Min.

She reached the semi-finals of the Australian Open in 2012, but was eliminated. She won the first doubles ITF title of his career in America. Subsequently, Bouchard won the third professional singles title of her career by beating Katharina Lehnert in Sweden. She was also the Wimbledon junior champion in 2012. At the end of July 2012, she reached the fifth ITF singles title of her career in Quebec. She entered the Citi Open with a tournament card and reached the first WTA quarterfinals of her career. Towards the end of the season, she won the first $50,000 tournament in Toronto.

What has been the highlight of Eugenie Bouchard’s life?

In 2012, Eugenie Bouchard had the opportunity to meet the famous tennis player Roger Federer at Wimbledon. She called it the highlight of her life. She started working with tennis player Nathalie Tauziat as part of the WTA Tour in 2013 and has stated that she travels with her part-time. During Tauziat’s coaching, she switched from a defensive style of play at junior level to an aggressive style of play.

She won the WTA Rookie of the Year award in 2013, becoming the first Canadian tennis player to receive the award since 1983.

Eugenie Bouchard still lost to Maria Sharapova in the quarter-finals of the 2015 Australian Open.

Eugenie Bouchard, who defeated Maria Sharapova 2-1 in the women’s singles match at the Madrid Open Tennis Tournament in 2017, made her mark in the 3rd round.

Eugenie Bouchard faced and lost to Simona Halep in the 2nd tournament of the first Grand Slam of 2018, the Australian Open.

Is Eugenie Bouchard into modeling?

Eugenie Bouchard, who said she was thinking of modeling after quitting tennis, posed in a bikini on the beach for Sports Illustrated magazine in 2018.

2013 – Tennis Canada Actress of the Year

2014 – Tennis Canada Actress of the Year

I love going to the beach and swimming in the ocean. I think it’s so relaxing. It’s also a great form of active recovery. It’s perfect for those rest days when you still want to move a little bit.

I’ve learned that it’s not a straight road to the top, and there are going to be setbacks along the way. You have to be patient, and you have to keep believing in what you’re doing. And keep believing in yourself, no matter what is happening. And then eventually you’ll get there.

I see it as a compliment to be compared to someone like Sharapova who has won five Slams. She’s a great champion. I see it in a positive light. But also I’m my own person. I don’t want to be the next someone else. I want to be the first of me.

I have very vivid dreams, and often – this happens to me at least a few times a week – I don’t know if something happened in real life or in a dream. I’m like, ‘Mom, did this neighbor come over, or was it a dream?’ And she’s like, ‘No, what are you talking about?’

Even the greatest player of all time loses sets or is down in a match. It just shows that, you know, a win is never guaranteed. It shows all of us that we have to work for every point, fight for every point no matter what.

I did not have a normal life. I’d be training when my sister would be at birthday parties and sleepovers. I finished high school by correspondence, basically working two full-time jobs. The last years were very, very tough. But I was willing to do that. It’s all about sacrifice.

Even when I was much younger, whatever I did, I wanted to do it to the best of my abilities. When I came home from school, I would be the one doing my homework while my siblings would be watching TV and putting it off until later.

If you’re playing someone you care about, it’s tough, and I don’t want to be in that situation. We are playing big matches for big points and prize money, and I take it very seriously. I relax when I’m outside tennis.

After they lose, I think all tennis players go back to a specific part of the match where they wish they had done something different.

Is Eugenie Bouchard making a comeback?

Eugenie Bouchard suffered a serious shoulder injury and the resulting surgery caused her to miss significant time on the court. After tearing her subscapularis while playing, Bouchard was forced to miss more than 18 months of action.

2023 is the year that she is hoping to make a comeback into the top echelons of women’s tennis. Unfortunately, her first comeback attempt has fallen short. She entered the Australian Open Qualifiers and squared off against American Ashlyn Krueger. The American drew first blood by winning the first set 6-3. Bouchard bounced back in the second set and won it 6-1. This took the match into the deciding set which was a close affair. During the ninth game, Bouchard was up 15-40 with the set tied at 4-4. However, she failed to convert on those break points and Krueger managed to hold her serve and go up 5-4 with Bouchard serving to stay in the match. Buoyed by her heroic serve hold, Krueger broke Bouchard in the tenth game and won the set 6-4, winning the match 6-3, 1-6, 6-4.

This was a major blow to Bouchard’s comeback attempt as she squandered a golden opportunity in the third set. As a result, the former Australian Open semi finalist will miss the major once again. Her last appearance was in 2019.

The Australian Open has been one of Bouchard’s favourite hunting grounds and she holds a 14-6 record in the tournament (her most successful Grand Slam tournament by far). She made the semi finals in 2014, losing to eventual champion Li Na. Those days seem to be long gone though. A tough and arduous road back to the top lies ahead for the Canadian.